an Our Father, 3 Hail Marys, and the Doxology. 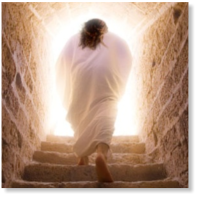 The "I want" of the divine Spirit to its cold Body is noiseless. It is uttered by the Essence to the immobile Matter. But no word is perceived by the human ear. The Flesh receives the order and obeys it with a deep sigh... Nothing else for some minutes. Under the Sudarium and the Shroud, the glorious Body is recomposed in eternal beauty, it awakes from the sleep of death, it comes back from the "nothing" in which it was, it lives after being dead. The heart certainly awakes and gives its first throb, it propels the remaining frozen blood through the veins and at once creates the full measure of it in the empty arteries, in the immobile lungs, in the dark brain, and brings back warmth, health, strength, thought.

Another moment, and there is a sudden movement under the heavy Shroud. It is so sudden that, from the moment He certainly moves His folded arms to the moment He appears standing, imposing, splendid in His garment of immaterial matter, supernaturally handsome and majestic, with a gravity that changes and elevates Him, and yet leaves Him exactly Himself, the eye has hardly time to follow the development. And now it admires Him: so different from what the mind remembers, tidied up, without wounds or blood, only blazing with the light that gushes from the five wounds and issues from every pore of His skin.

When He moves, coming towards the exit, and the eye can see beyond His brightness, two most beautiful brilliances, but similar to stars compared with the sun, appear to me, one on this side, the other on the other side of the threshold, prostrated in the adoration of their God, Who passes by enveloped in His light, beatifying with His smile, and He goes out, leaving the funereal grotto and going back to walk on the earth, that awakes out of joy and shines in its dews, in the hues of herbs and roseries, in the countless corollas of apple-trees, that open, by a wonder, to the early sun that kisses them, and to the eternal Sun Who proceeds under them.

Back The Ascension The Resurrection (full) 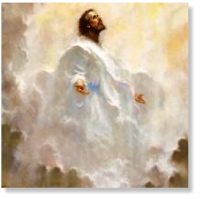 Jesus is standing on a large stone, that protrudes a little and stands out in its whiteness among the grass of a clearing. He is brightly illuminated by the sun that makes His garment shine as white as snow and His hair like gold. His eyes sparkle in a divine light. He opens out His arms in the gesture of an embrace. He seems to be wishing to press to His chest the multitudes of the Earth, whom His spirit sees represented in that crowd. His unforgettable inimitable voice gives the last order: "Go! Go in My Name to evangelize the peoples as far as the ends of the Earth. God be with you. May His Love comfort you, may His Light guide you, may His Peace dwell in you until you reach eternal life."

He becomes transfigured in beauty. Handsome! As handsome and even more so than He was on Tabor. They all fall on their knees worshipping. While He is already rising from the stone on which He is standing, He looks once again for the face of His Mother, and His smile reaches a power that no one will ever be able to express… It is His last goodbye to His Mother. He rises, rises… The sun, now more free to kiss Him, as no foliage, not even a thin leaf, intercepts its beams, brightens with its splendour the GodMan, Who with His most Holy Body is ascending to Heaven, and displays His glorious Wounds that shine like living rubies. The rest is a pearly smile of light. And it is really the Light that is revealing itself for what it is, at this last moment as on Christmas night. Creation sparkles in the light of the Christ Who is ascending. A light exceeding that of the sun. A superhuman and most blissful light. A light descending from Heaven to meet the Light ascending to it… And Jesus Christ, the Word of God, disappears from the sight of men in this ocean of brightness…

Back The Descent of the Holy Spirit The Ascension (full)

The Descent of the Holy Spirit 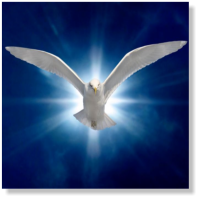 A very loud and harmonious roar, that resembles the wind and the harp, as well as human singing and the sound of a perfect organ, suddenly resounds in the silence of the morning. It comes near, more and more harmonious and loud, and with its vibrations it fills the Earth, propagates them and impresses them on the house, on the walls, on the furniture. The flame of the chandelier, so far immobile in the peace of the closed room, flickers as if a wind were blowing and the little chains of the chandelier tinkle vibrating under the wave of the supernatural sound that strikes them.

The apostles raise their heads frightened, and as that most beautiful rumble, in which are all the loveliest notes that God gave the Heavens and the Earth, approaches them more and more, some stand up ready to run away, some crouch on the floor covering their heads with their hands and mantles, or beat their breasts asking God to forgive them, some press against Mary, too frightened to keep the reserve they always have for the Most Pure Mother. Only John is not frightened, because he sees the bright peace of joy that is accentuated on the face of Mary, Who raises Her head smiling at a thing known to Her alone, and Who then slides down on Her knees opening Her arms, and the two blue wings of Her mantle so opened stretch out on Peter and John, who have imitated Her, kneeling down. But all this, which took me some minutes to describe, has taken place in less than one minute.

And then the Light, the Fire, the Holy Spirit enters, with a last melodious loud noise, in the form of a very shining burning globe, into the closed room, without any door or window being moved, and remains hovering for a minute over Mary's head, about three palms above Her head, which is now uncovered, because Mary, upon seeing the Fire Paraclete, has raised Her arms to invoke Him and has thrown Her head back with a cry of joy, with a smile of boundless love. And, after that moment in which all the Fire of the Holy Spirit, all the Love, is collected in His Spouse, the Most Holy Globe splits into thirteen canorous very bright flames, of so bright a light that no earthy comparison can describe, and it descends to kiss the forehead of each apostle.

Back The Assumption The Descent of the Holy Spirit (full) 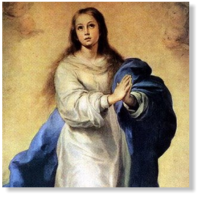 John continues to stare at that body that rises towards Heaven and, certainly through a prodigy granted to him by God, to comfort him and to reward him for his love for his adoptive Mother, he distinctly sees Mary, enveloped now in the beams of the sun that has risen, come out of the ecstasy that had separated Her soul from Her body, become alive, stand on Her feet, as She also now enjoys the gifts typical of bodies already glorified.

John looks and looks. The miracle granted to him by God enables him, against all natural laws, to see Mary as She is now, while She rapidly ascends towards Heaven, surrounded, but no longer helped to ascend, by the angels singing hosannas. And John is enraptured by that vision of beauty that no pen of man, or human word, or work of artist will be ever able to describe or reproduce, because it is of indescribable beauty. John, still leaning against the low wall of the terrace, continues to stare at that splendid shining form of God – because Mary can really be said to be so, formed in a unique manner by God, Who wanted Her immaculate, so that She might be the form for the Word Incarnate – while it ascends higher and higher. And the God-Love grants a last supreme prodigy to His perfect loving disciple: to see the meeting of the Most Holy Mother with Her Most Holy Son, Who splendid and shining as well, handsome with indescribable beauty, descends rapidly from Heaven, arrives at His Mother, presses Her to His heart, and together, more refulgent than two major planets, returns with Her whence He came.

John's vision is over. He lowers his head. On his tired face are visible both his sorrow for the loss of Mary and his joy for Her glorious destiny. But by now joy exceeds sorrow.

Back The Crowning of Mary as Queen The Assumption (full)

The Crowning of Mary as Queen 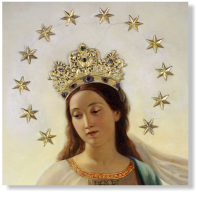 “Here is the perfect work of the Creator. This is what I created in My truer image and likeness among all the sons of man, the fruit of a divine creative masterpiece, the wonder of the Universe that sees closed in one only being the divine, in the eternal spirit like God and like Him spiritual, intelligent, free, holy, and the material creature in the most holy and innocent body, to which every other living being, in the three kingdoms of creation, is compelled to bow. This is the witness of My love for man, for whom I wanted a perfect organism and a blissful destiny of eternal life in My Kingdom. This is the witness that I have forgiven man whom, by will of the Trine Love, I granted to be reinstated and recreated in My eyes. This is the mystic stone of comparison, this is the link of junction between man and God, it is She Who takes the times back to the early days and gives My divine Eyes the joy of contemplating an Eve as I had created her, and now made even more beautiful and holy, because She is the Mother of My Word, and because She is the Martyr of the greatest forgiveness. For Her Immaculate Heart that never knew any stain, not even the lightest, I open the treasures of Heaven, and for Her head, that never knew pride, I make a wreath of My brightness and I crown Her, because She is most holy to Me, so that She may be your Queen.”

Back Ending Prayers The Crowning of Mary as Queen (full)

V. May the Divine assistance remain always with us.
R. And may the souls of the faithful departed, through the mercy of God, rest in peace. Amen

Could not contact Server.
Without His Blood, without His Immolation fulfilled through the Holy Spirit _ that is, through Love _ neither on Earth nor in Heaven would you have been able to serve the living God.
Book of Azaria, April 7th, 1946