an Our Father, 3 Hail Marys, and the Doxology.

Back The Agony in the Garden

The Agony in the Garden 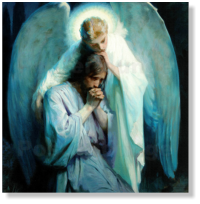 "And amid muddled questions and answers they put on their mantles again… Just in time to appear in order to the guards headed by Judas, as they burst into the little square lighting it up sinisterly with many torches. It is a horde of bandits disguised as soldiers, who look like jail-birds and grin like devils. There is also an odd champion of the Temple. All the apostles jump to one corner. Peter in front, the others behind him in a group. Jesus remains where He was. Judas approaches Jesus, enduring the glance of His eyes, which have become the flashing eyes of His best days. And he does not lower his face either. On the contrary, he approaches the Master with the smile of a hyena and kisses His right cheek. "My friend, what have you come for? Are you betraying Me with a kiss?" Judas bends his head for a moment, then raises it… insensible to reproach as to every invitation to repent. Jesus, after the first words uttered with the majesty of a Master, speaks in the sorrowful tone of one who resigns oneself to a misfortune. The guards, shouting, come forward with ropes and clubs and try to get hold not only of Christ, but also of the apostles, with the exception of Judas Iscariot, of course. "Who are you looking for?" asks Jesus calmly and solemnly. "Jesus the Nazarene." "I am He." His voice is thunderous. Before the murderous world and the innocent one, before nature and the stars, Jesus bears this clear, loyal, certain witness to Himself, I should say that He is happy to be able to bear it. But, if He had thrown a thunderbolt, He could not have done more. They all fall to the ground like mown sheaves of corn. No one remains standing except Judas, Jesus and the apostles, who take fresh heart again at the sight of the overthrown soldiers, so much so that they approach Jesus, threatening Judas so explicitly that the latter makes a leap just in time to avoid a masterly stroke of Simon's sword. In vain pursued by the stones and sticks thrown at him by the apostles not armed with swords, he escapes beyond the Kidron and disappears in a dark lane.

The Scourging at the Pillar 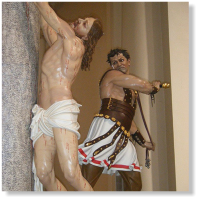 Behind Him stands one who looks like an executioner, with a clear Jewish profile; in front of Him, another man, looking like the previous one. They are armed with scourges, made of seven leather strips tied to a handle and ending with small lead hammers. They begin to strike Him rhythmically, as if they were practising. One in front and one behind, so that Jesus' trunk is in a whirl of lashes and scourges. The four soldiers, to whom He has been handed, are indifferent and are playing dice with other three soldiers who have just arrived. And the voices of the players follow the rhythm of the sound of the scourges, which hiss like snakes and then resound like stones striking the stretched skin of a drum. They beat the poor body, which is so slender and as white as old ivory, and then becomes covered with stripes that at first are a brighter and brighter pink shade, then violet, then it displays blue swellings full of blood, then the skin breaks letting blood flow from all sides. They redouble their cruelty on His thorax and abdomen, but there is no shortage of blows given to His legs, arms and even to His head, so that no fragment of His skin may be left without pain.

Back The Crowning with Thorns The Scourging at the Pillar (full)

The Crowning with Thorns 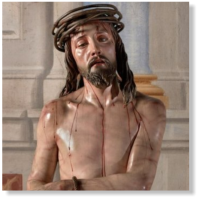 "Wait. The Jews want a king. Now we will give them one. Him…" says a soldier.

And he runs out to a court that is in the back, from which he comes back with a bunch of branches of wild hawthorn, still flexible, because springtime keeps the branches relatively tender, whilst the long sharp thorns are hard. With a dagger they remove leaves and buds, they bend the branches forming a circle and they place them on His poor head. But the cruel crown falls down on His neck.

"It does not fit. Make it narrower. Take it off."

They take it off and scratch His cheeks, risking to blind Him, and they tear off His hair in doing so. They make it smaller. Now it is too small, and although they press it down, driving the thorns into His head, it threatens to fall. They take it off once again, tearing more of His hair. They adjust it again. It now fits. At the front there are three thorny cords. At the back, where the ends of the three branches interweave, there is a real knot of thorns that penetrate into the nape of His neck.

Back The Carrying of the Cross The Crowning with Thorns (full)

The Carrying of the Cross 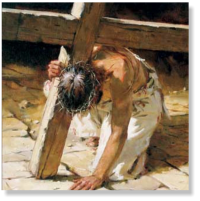 Jesus proceeds panting. Each hole in the ground is a trap for His staggering feet, a torture for His shoulders covered with wounds, and for His head crowned with thorns, also because the sun, which is exceedingly warm, although now and again it hides behind a leaden awning of clouds, shines perpendicular on it. So even it is concealed, it still burns. Jesus is congested with fatigue, fever and heat. I think that also the light and the howling must be a torture for Him. And if He cannot stop His ears in order not to hear so much coarse shouting, He half closes His eyes not to see the road dazzling in the sunshine... But He must also reopen them, because He stumbles over stones and holes, and each stumble is painful, as it jerks the cross, which knocks against the crown, which rubs against the wounded shoulder, widening the sores and increasing the pain. The Jews cannot hit Him directly any longer. But odd stones and blows with cudgels still strike Him. The former, particularly in the little squares crowded with people. The latter, instead, at bends, along the narrow streets with frequent steps going up or down, at times one, at times three, at times more, because of the continuous variations of the ground. The procession is compelled to slow down at such places, and there is always some volunteer (!) who challenges the Roman lances if only to add a finishing touch to the masterpiece of torture that Jesus is by now.

Back The Crucifixion The Carrying of the Cross (full) 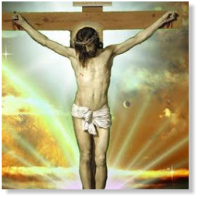 Two executioners sit on His chest to hold Him fast. And I think of the oppression and pain He must have felt under that weight. A third one takes His right arm, holding Him with one hand on the first part of His forearm and the other on the tips of His fingers. The fourth one, who already has in his hand the long sharp-pointed quadrangular nail, ending with a round flat head, as big as a large coin of bygone days, watches whether the hole already made in the wood corresponds to the radius-ulnar joint of the wrist. It does. The executioner places the point of the nail on the wrist, he raises the hammer and gives the first stroke.

Jesus, Who had closed His eyes, utters a cry and has a contraction because of the sharp pain, and opens His eyes flooded with tears. The pain He suffers must be dreadful... The nail penetrates, tearing muscles, veins, nerves, shattering bones...

Mary replies to the cry of Her tortured Son with a groan that sounds almost like the moaning of a slaughtered lamb; and She bends, as if She were crushed, holding Her head in Her hands. In order not to torture Her, Jesus utters no more cries. But the strokes continue, methodical and hard, iron striking iron... and we must consider that a living limb receives them.

Back Ending Prayers The Crucifixion (full)

V. May the Divine assistance remain always with us.
R. And may the souls of the faithful departed, through the mercy of God, rest in peace. Amen

A precise knowledge of Faith and a just application of the Gospel - wherein, when it is applied to perfection, the whole ancient religion is fused to the Christian religion - impede the creation of heresies and sects, of blameworthy exaltation or coldness, and a holy will of love destroys with its fire the venomous plants of heresies and sects. It is always love which saves and conserves. It is not fanatic exaltation or freezing sternness. It is being Christians as Christ wanted.
Book of Azaria, July 7th, 1946