Note Regarding the Work

In order to understand the gift we have been given in Poem of the Man-God, please take a moment to read the Lord's reasons for the visions and dictations, comprising more than 15,000 handwritten pages, which are included in the work. These were given to a bedridden Italian woman, who never set foot out of Italy, over the span of about five years (1943-1947). This work, when read prayerfully, with a spirit of good will, changes lives; it is capable of enhancing, or restoring, our understanding of the life of Christ to its original beauty and purpose.

"Publish it just as it is. There is no need to give an opinion as to whether it is of supernatural origin. Those who read it will understand. "

Pope Pius XII, February 27, 1948, in an audience with the three Servites of Mary in charge of the work:

Fr. Corrado M. Berti, O.S.M. (professor of dogmatic and sacramental theology at the Pontifical Marianum Theological Faculty in Rome from 1939 onward, and Secretary of that Faculty from 1950 to 1959)

Fr. Andrew M. Cecchin (Prior of the International College of the Servites of Mary in Rome)

For those who are still doubtful, a careful study of Stephen Austin's "Summa and Encyclopedia" will help resolve any concerns. Stephen provides proofs of the accuracy of the work. A few of the subjects on which he expounds:

A personal note about the work ...

After witnessing too much in the Church, in my retreat ministry, in many who are consecrated to the Lord in the priesthood and religious life, in many who are respected as modern-day visionaries - even some with striking "gifts", such as visible stigmata, I found myself so completely disillusioned and disaffected that I left the Church, and subsequently lost my faith.

After a number of years of wallowing in agnosticism and despair, a quiet yearning began to replace the harshness of doubt and cynicism. That yearning drew me to begin reading, again, the five volumes of Poem of the Man-God, and to acquire the 3 companion Journals. At its outset, that yearning could have been better described as "wishful thinking". The "stories" calmed me, helped me find peace and light in the sea of chaos and darkness which surrounded me.

Over time, my thoughts on what I was reading began to take on more of a quality of prayer ... although they were still merely monologues aimed at the Being I wished were really there. Almost imperceptibly, those monologues slowly 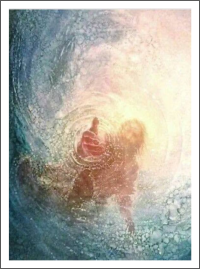 transitioned into dialogues. The "Being" I wished really existed began to make Himself known ... revealing Himself in small ways, wooing me ... and although I am a cradle Catholic, and was well versed in all things catechetical, liturgical, Biblical,etc., I found myself getting to know the Lord in ways I had never imagined.

The dialogue even took on a physical aspect on more than one occasion ... when a plea for help would result in actual, tangible, intervention in my daily life. Even more often, a question would produce an unmistakable reply ... sometimes in only a matter of minutes.

And yet, the thought continued to badger me ... hound me ... intrude on my comfortable, newly found, faith and prayer life. The Mass ... the Sacraments ... began to allure, draw me ... inexorably. Finally, I could no longer ignore it ... I knew that the Lord wanted me back in the Church. Still ... I dug in my heels for months ...

... but the Lord was patient with His recalcitrant child. Finally, I gave in to the insistent prodding, and made up my mind. I went on private retreat at a Benedictine monastery in Massachusetts ... and while there, took all of the necessary steps for my return to the Church and the Sacraments.

The journey since then ... has deepened, and the ensuing years have only continued to draw me further into Him, His Will, His Love, His Purpose ... His vision of what He wants for this child of His. I don't know how long the journey will be, but I know, beyond the shadow of a doubt, that it continues to lead me toward the Destination. I'm not there yet, I'm an unfinished work ... there are still far too many "rough spots" on this child of God, but I know that as long as I keep my eyes focused on the Lord of my destiny, that neither death, nor life, nor angels, nor principalities, nor present things, nor future things, nor powers, nor height, nor depth, nor any other creature, will be able to separate me from Him.

As with everything else which is good and holy, the enemy angrily reviles, mocks, ridicules, and does his best to discredit, devalue, and destroy the work. We are told in Matthew 7:18, 20 "A good tree cannot bear bad fruit, and a bad tree cannot bear good fruit." ... "Thus, by their fruit you will recognize them." The fruit of Poem of the Man-God is good. The enemy has no desire to lead people into a deep relationship with God, or back to the Church and the Sacraments. That, in itself, should say a great deal about the work we call "Poem of the Man-God".

See for yourself ... read the excerpts contained on this website with an open heart, and a prayerful spirit. Humbly ask the Lord of your journey and your Destination to enlighten the passages for you, and give life to the imagery they provoke.

Come Holy Spirit, fill the hearts of your faithful
and kindle in them the fire of your love.
Send forth your Spirit and they shall be created.
And You shall renew the face of the earth.

Oh God, who by the light of the Holy Spirit,
did instruct the hearts of the faithful,
grant that by the same Holy Spirit we may be truly wise
and ever enjoy His consolations,
Through Christ our Lord, Amen.

Could not contact Server.
Without His Blood, without His Immolation fulfilled through the Holy Spirit _ that is, through Love _ neither on Earth nor in Heaven would you have been able to serve the living God.
Book of Azaria, April 7th, 1946