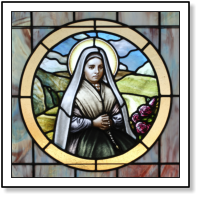 When a woman appears to you, standing in a crevice in a wall of rock, and tells you to build a shrine to her, you might be tempted to either brush the whole thing off as some sort of hallucination brought on by Lord knows what, or you might seek immediate psychiatric help. If you tell anyone of this vision, they may very well suggest the latter.

When someone questions our faith, how do we react? If someone accuses us of having ulterior motives, or of being misguided, or of being downright dishonest, do we face this with persistent belief, or do we crumble at the first opposition? Perhaps these are questions that we don’t consider, and we might not have a ready answer.

St. Bernadette Soubirous faced criticism, unbelief, horrible accusations, and other opposition when she revealed her mystical visions. Her spiritual leaders scoffed at her, or worse. Her parents initially expressed the same incredulity as everyone else. But there was nothing that could shake her faith.

Bernadette was born on January 7, 1844. Her father was a businessman with little to no aptitude for business; eventually he turned to working odd jobs whenever he could, resorting to alcohol for solace. Bernadette’s mother Louise was a devout Catholic who instilled the importance of faith and a relationship with the Lord in her children.

The nature of her family life helped to develop a profound work ethic, a deep faith, and a strength and steadfastness in Bernadette. Louise had to find work whenever she could, in order to help the family make ends meet and give the children their daily necessities. Because she was out of the house many days, many of the household tasks fell to Bernadette, the oldest. This was not limited to cleaning and cooking, but she was a significant influence in the moral and religious education of her younger siblings, as well. There is even a report of Bernadette, as a young girl, taking her baby sibling out to her mother who was working in the field so the child could be nursed. Bernadette persisted in all of this, in spite of her physical ailments, and significant physical weakness.

Bernadette suffered greatly from early childhood. She was afflicted by digestive trouble from a young age, and a respiratory problem that would persist for the rest of her life. Bouts with cholera and tuberculosis threatened her life, but she fought through them every time. Young Bernadette also had a reputation as intellectually slow; her first communion was greatly delayed, because her teacher gave up after only a few lessons, insisting that Bernadette was too dull to grasp the material. But again, her obstinate refusal to give in led to her getting an education, and finally communing with her Lord.

The Soubirous family’s poverty became so great that they eventually moved into a one-room dwelling that had previously been a jail, which was called “the dungeon”. When, on February 11, 1858, Bernadette, her sister, and a friend were gathering wood to heat the home near the grotto of Massabielle, near Lourdes, France, Bernadette had an experience that would utterly change her life. While Bernadette tried to find a place to cross the stream, she heard the sound of a great wind, but nothing moved – save a wild rose growing in a niche in the grotto. As Bernadette looked on, there was suddenly a blindingly brilliant light, and a figure clad in white – a woman whom Bernadette would refer to simply as aquero, “that one.” Bernadette proceeded to pray the rosary, and when she completed it the woman smiled and disappeared.