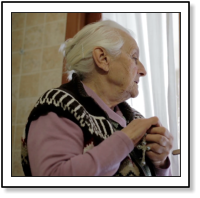 When I was younger, I couldn’t wait to move away from home and start my “adult” life. I did well in school, attended a large university and moved to the city as quickly as I could. I couldn’t wait to get away from my parents, teachers, and the small town atmosphere where everybody knew everything about everyone.

Needless to say, I took my newfound freedom and I ran with it. I rejected all the rules I had been taught as a youngster and I lived a very busy and immoral life. I thought that I had everything I wanted. When I landed my first real job, I moved into a decent little apartment and I was anxious to live what I thought was the mature life of a young man on his own.

One night when I came home from work, I was getting ready to go out with friends and I noticed an older lady in a window directly across the alley from my building. She had her head bowed and she had something in her hands. I looked more closely and I saw it was a rosary. She was actually praying! I thought to myself, “Wow, people still do that? How old-fashioned!” I dismissed her presence every evening, although I could see her there praying.

Strangely enough, she became a comfort for me. I began to look for her. I felt at ease when she was there, day after day, month after month, praying and praying. She was the light to my darkness.

One night I came home and showered and I got dressed, ready to go to one of those parties that are always going on in the city. I glanced over at her window, expecting to see her sitting there, the beads flowing through her fingers, as she invoked heaven. But she wasn’t there. I thought that was strange because the light was on, but she wasn’t in her usual place. If anything she was a person of habit. I thought she might have forgotten or gone out herself. I didn’t really get worried until the next night. I was staying in and I curiously glanced over at her window at the usual time. She still wasn’t there. The lights were on, but there was no lady in the window.

I put on my coat and went over to the building next door. I spoke to the super and he told me that he hadn’t seen or heard from her in a couple of days. We went to her apartment together and knocked on the door. We didn’t hear anything at first, but then came a muffled sound then silence. The super let us in and we discovered the lady on the floor. After calling for the paramedics and a quick ride to the hospital, I discovered that the lady was unconscious due to a heart attack and the lack of food for at least two days. They weren’t sure if she would live or not.

I don’t know what happened when I heard this, but I was devastated. I didn’t know this person, but she had provided me with the stability and serenity I really needed without knowing it. I was sick about her condition. I decided then that I would do what I hadn’t done in years. I found the hospital chapel and prayerfully knelt down to plead for her life.

Everything else in my life, the parties, the drinking, everything...stopped. I checked in every day for almost a week when I was finally told that she had awakened and asked how she gotten there. The nurses told her that a young man had called the ambulance and made sure that she was taken to the hospital. She had asked to see me when I arrived. 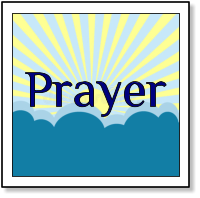 When I walked in, she looked very calm. I introduced myself and she thanked me for helping her. I then told her about how she had become like a beacon for me. How she grounded me with her presence and her prayer. And I told her that I had returned to prayer for her sake, asking God whom I had ignored for so long to help her. She said, “I know who you are. You are the young man in the window. And I have a secret: I’ve been praying for you!” ~adapted from the Catholic Digest.

In this Holy Year of Mercy, prayer is a powerful act of mercy toward others. It is a great weapon in the fight against evil and indifference. We should remember that prayer and action go together, that prayer leads to action. So let us pray with all our hearts, and practice what we pray for with all our strength.