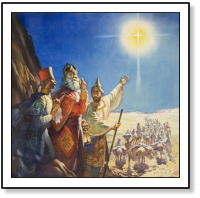 “When Jesus was born in Bethlehem of Judea, in the days of King Herod, behold, magi from the east arrived in Jerusalem, saying, "Where is the newborn king of the Jews? We saw his star at its rising and have come to do him homage." When King Herod heard this, he was greatly troubled, and all Jerusalem with him.” (Matt. 2:1-3)

In this Gospel, presented to us by St. Luke, we have a contrast in character. Firstly we have the example of the Magi, wise men who did not believe in God, but who were searching for the truth. They left their homes in the East, following a strange star that appeared in the sky, bringing with them their gifts, meant for a king. Secondly, we have the example of King Herod, also probably not a real believer in God, but one who re-built and supported the Temple in Jerusalem and thus a supporter of the official religion of Israel. It is quite clear from this opening passage that Herod was more interested in maintaining his power than in any truth that may come from God.

Assembling all the chief priests and the scribes of the people, he inquired of them where the Messiah was to be born. They said to him, "In Bethlehem of Judea, for thus it has been written through the prophet: 'And you, Bethlehem, land of Judah, are by no means least among the rulers of Judah; since from you shall come a ruler, who is to shepherd my people Israel.'" Then Herod called the magi secretly and ascertained from them the time of the star's appearance. He sent them to Bethlehem and said, "Go and search diligently for the child. When you have found him, bring me word, that I too may go and do him homage." (Matt. 2:4-8)

Herod was informed about God’s revelation in the Scriptures when the learned and holy men of the Temple were called in to consult about this new phenomenon. The text of Psalm 72 and the prophecy of the Holy Prophet Isaiah made very clear who was expected and what His role was to be in Israel. The Messiah, the Anointed One of God would be heralded by the arrival of kings from all over the earth, the non-believing world, who would pay Him homage and come to believe in Him. Herod was a master at manipulation and intrigue, however. He would put an end to this rival for power before he even got a chance to mature. He sent the Magi on their way but with the intention of destroying the One whom they were seeking.

After their audience with the king they set out. And behold, the star that they had seen at its rising preceded them, until it came and stopped over the place where the child was. They were overjoyed at seeing the star, and on entering the house they saw the child with Mary his mother. They prostrated themselves and did him homage. Then they opened their treasures and offered him gifts of gold, frankincense, and myrrh. And having been warned in a dream not to return to Herod, they departed for their country by another way. (Matt. 2:9-12)

When the Magi left the House of Herod, that palace clothed in the cloud of fear, worldliness and earthly power, they were able to see clearly again! They saw the star they were seeking and guided by the light of that heavenly phenomenon, they arrived at the feet of the King they were in search of! It is no coincidence that the great chant of the Church at the Easter Vigil calls Jesus “The Morning Star.” He guides us through the darkness of doubt. His light can shine in times of darkness and despair. The gentle light of His Truth can guide us through the gloom of our lives. But we must allow this to happen. Herod did not discern the truth of the arrival of the Messiah in a poor cave in Bethlehem. He could not see the Christ, the Savior of the World because his own sight, his own faith was clouded by the world. His darkness would, in the following months, lead to the slaughter of the Innocents, the baby boys of Bethlehem who were killed to get rid of what Herod perceived was a political rival for his throne.

But the Magi saw with eyes of faith. They saw the rising of a star, a dim light in the night that grew stronger the 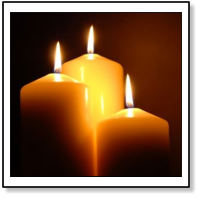 closer they came to their goal. They followed that light to the Light of the World! They allowed that light to shine upon them, they allowed it to shine within them. And in their joy, they returned to their homelands very far away from Judea with the knowledge that the “the light shines in the darkness, and the darkness has not overcome it.” (John 1:5)

In this Holy Year of Mercy, we, too, can strive to live in the Light of the Truth of our King and God. If we can see with the eyes of faith, if we keep the flame of faith burning in our lives, we too can sing the resurrection hymn with the whole Church as she prays:

May this flame be found still burning by the Morning Star: the one Morning Star who never sets, Christ your Son, who, coming back from death's domain, has shed his peaceful light on humanity, and lives and reigns for ever and ever. Amen. (Exultet)